"Censorship is the mother of metaphor." - Borges

While I'm on record as being with the cognitive neurolinguistics of Lakoff, et.al., as my main model for the mother of metaphor, Borges here gets at something I find exceedingly interesting: the now-marginalized idea that writers have used coded language for various reasons, and one of them would be to escape persecution by the State. I give Borges his point here.
-------------------------------------------
Joyce's Friend Byrne's Crypto

With the debates about mass surveillance and encryption continuing on to what I assume is a slow boil, and with brilliant high school students bringing the debate (literally) to Capitol Hill, many of us of a certain caste of mind eventually wonder where and when this began. One day we find ourselves in the archives and indexes of old books. We learn some of what we set out for. In my case - and probably (?) yours - you get the serendipitous hit, too. A recent example from my own forays:

John Francis Byrne, who was James Joyce's best friend at university in Dublin, later invented a cryptographic device that he thought might make him rich, because it was an uncrackable "Chaocipher," which used what's called an "autokey" in the trade. It was a cigar box with some bits of strings and a few odds and ends. When Byrne showed it to his cousin she said it would win him a Nobel Prize, "not for science, apparently, but for ushering in an age of universal peace by conferring the gift of perfect security upon the communications of all nations and all men." - The Codebreakers, Kahn, p.767 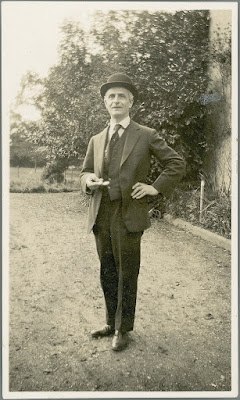 Byrne thought his device would be used by businessmen, brotherhoods, religious groups and social institutions, and by "husband, wife, or lover." (Kahn, quoting Byrne, p.768) Anyone could use his device anywhere and it would provide perfect encryption. Byrne met with and tried to sell his device to the US Army, State Department, AT&T, and the Navy, and was turned down. The State Dept sent him a form letter, telling him their own "ciphers are adequate to (our) needs."

Byrne, who published a book in 1951 called The Silent Years, mostly about remembering Joyce, devoted the final third of his book to telling the world about his amazing encryption machine, and actually challenged the public to crack his code, offering "$5000 or the total royalties of the first three months after publication of his book..." (Kahn, 768) Byrne challenged the American Cryptogram Association, the New York Cipher Society and Norbert Wiener to crack his code.

Kahn:
"Nobody ever claimed the money, and Byrne died a few years later. One may presume that the reason both for the failure of the public to read his cipher and failure of the government to adopt it was that while the cipher probably had its merits, its many demerits outweighed them for practical use. Byrne, like many inventors, both won and lost. His cipher was never broken. But his dream never came true." (768) 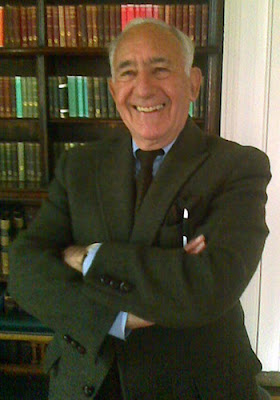 David Kahn, 2013. His book The Codebreakers
is a tour-de-force.

When Joyce came back to Dublin in 1909, another of his old friends from university, Vincent Cosgrave, told Joyce that Nora had "walked out" with him - Cosgrave - around the time Nora fell for the dreamy writer, which devastated him. He wrote accusatory letters to Nora, who was living at their home in Trieste. He wondered if Giorgio, his first child and only son, born in 1905, was really his. Byrne tried to convince Joyce that Cosgrave and Oliver St. John Gogarty (the model for Ulysses's "Buck Mulligan") were trying to ruin Joyce. It was a plot. Joyce's brother Stan told James that Nora had rebuffed Cosgrave, and this calmed the Irish/cosmopolitan bard.

In real life, Byrne lived with cousins at 7 Eccles Street in Dublin, which is the address of Leopold and Molly Bloom. Byrne is "Cranly" in Portrait of the Artist as a Young Man, the character who lends a sympathetic ear to Stephen's aesthetic ideas, amongst other things. The section late at night in Ulysses, where Bloom has forgotten the key to his house, so he jumps the fence and gets in through the backdoor and lets Stephen in? That actually happened with Byrne. Joyce makes me think of it as a mythic thing, which is marvelous on his part...

"Against history, we developed community through the use of a subtle and ambiguous language that could be heard in one way by the oppressor, in another way by your friends. Our weapons of sabotage were ambiguity, humor, paradox, mystery, poetry, song and magic."
-Andrei Codrescu, the Romanian essayist, broadcaster and poet, in his 1990 The Disappearance of the Outside: A Manifesto For Escape, pp.38-39

In a dizzyingly wonderful book that leaves me wondering what I'm missing, Michigan State professor of political science, Arthur Melzer, published Philosophy Between the Lines: The Lost History of Esoteric Writing (2014).

[Get a load of his out-of-book appendix, a real data-dump of historical textual examples that bolster his claims that esoteric writing (writing in a tricky way in order to not be persecuted or not damage the body politic, but it's more complicated than that) has basically gone on since writing and the State emerged.]

The book was reviewed widely and positively...by NeoCons. The bad reviews seem to be from anti-NeoCons. Melzer says the book needed to be written, and the subject - which was one of Leo Strauss's main riffs - wasn't really Melzer's thing. He doesn't like esoteric writing. He wants to read writers who say exactly what they mean.

I've read the book and find it magisterial. Then I made the mistake of re-reading a book of essays, mostly by Umberto Eco, with contributions by Christine Brooke-Rose, Richard Rorty, and Jonathan Culler: Interpretation and Overinterpretation. I find it heady stuff. But it worsened my probably paranoid overinterpretation of Melzer's avowed reluctance to address the topic, and his NeoCon ties.

Melzer:
"My friends and colleagues all regard it as curious that I should be the one to write this book. There are people who have a real love for esoteric interpretation and a real gift for it. I am not one of them."
-p.xvii

And yet there's 450 pages (plus that online appendix!), scholarly throughout. And then I'm into Eco, illustrating how paranoid overinterpretations occur. And there's NeoCon Mark Lilla, in his book on Vico (who to me is the most interesting example of what Melzer calls "defensive esoteric" writing), saying he disagrees with Leo Strauss on an esotericist reading of Vico. (See G.B. Vico: The Making of an Anti-Modern, pp.243-245)

Before Melzer's book appeared, for years I'd accumulated notes on the topic on my own, but I hadn't read NeoCon godfather Strauss's 1952 Persecution and the Art of Writing. I accumulated notes based on my readings of Robert Anton Wilson, William S. Burroughs, Timothy Leary, Norman O. Brown, Frances Yates, Nietzsche, etc.

The British empiricist Isaiah Berlin knew Strauss and liked him, admired his mind, but thought a lot of his ideas were wrong, including the esoteric idea:

Berlin:
"Strauss was a careful, honest and deeply concerned thinker, who seemed to have taught his pupils to read between the lines of the classical philosophers - he had a theory that these thinkers had secret doctrines beneath the overt one - which could only be discovered by hints, allusions and other symptoms, sometimes because such thinkers thought in this fashion, sometimes for fear of censorship, oppressive regimes and the like. This had been a great stimulus to ingenuity and all kinds of fanciful subtleties, but seems to me to be wrong-headed. Strauss's rejection of the post-Renaissance world as hopelessly corrupted by Positivism and empiricism seems to me to border on the absurd."
-Conversations with Isaiah Berlin, with Ramin Jahanbegloo, pp. 31-32

And yet Berlin seems to me one of the most astute readers of Vico. And yet: I agree with Berlin about Strauss's rejection of Modernity. And yet: Melzer's book seems overwhelmingly persuasive.

I have not read my way into yet another Chapel Perilous. But I have once again become, lately, ever-more hyper-aware of my own interpretive schemes in reading.

Terry Southern: When I was young, they had what were called "little fuck-books" - which featured characters taken from the comics. Most of them were absurd and grotesque, but there were one or two of genuine erotic interest; "Blondie" comes to mind, as do "Dale" and "Flash Gordon" and darling "Ella Cinders." For a while, convinced there was more than met the eye, I tried to "read between the lines" in the famous Nancy Drew books, searching for some deep secret insinuation of erotica so powerful and pervasive as to account for the extraordinary popularity of these books, but alas, was able to garner no mileage ("J.O." wise) from this innocuous, and seemingly endless, series.
-Now Dig This: The Unspeakable Writings of Terry Southern, 1950-1995, ed. Mike Southern and Josh Alan Friedman, p.2
-------------------------------------------------------- 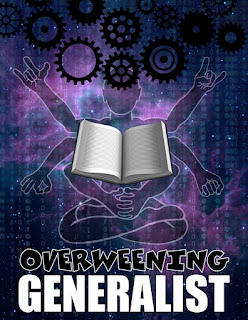 Was this post inspired by the ongoing Cosmic Trigger reading group, and the suggestion that Illuminati writings were written in code to avoid persecution by the Inquisition and other authorities?

But also, yea: I hoped someone would point out there's a group reading of CT1 going on over at

And then again, yes: I had many other reasons.

So, I wonder what hidden messages you have insinuated into this text. Some writers seem to me to take years to learn how to read: Pound, Joyce, Eliot, etc. I always find it surprising when I hear professors make judgments of works by these authors which they have only read once. Great post, as usual.