If you haven't seen this gem, check it out here.

NPR's version of the story likens it to something out of Eco's Foucault's Pendulum, which seemed like a decent riff, but I had immediately thought of the w.a.s.t.e underground postal system in Pynchon's The Crying of Lot 49, a postal system that has operated successfully for centuries and under the radar of The State.

There's still a lot we don't know about these three Masonic police-persons. Unlike those silently awaiting Trystero's Empire, they eventually introduced themselves to the cops in Santa Clarita, a noted home of many LAPD officers. They had enough police equipment and accoutrements to "pass" as cops. How? I'd like to know. 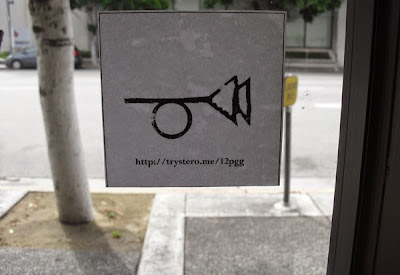 This Pynchon symbolic meme has long had legs

This story seems made up by a Pynchonian mind, but so far it looks real. Is it a cargo cult of some sort? They seem to have pulled the 3000 year old Knights Templar dealio out of thin air. This made me think: performance art? More like guerrilla ontology. Or, operationally put: this is currently acting like guerrilla ontology in the nervous system of the present writer.

It's probably a mere coincidence that Pynchon's birthday is tomorrow, 8 May. He'll be 78.

Unless there's some bizarro small number groupthink led by a charismatic goin' on - many, if not all, religions start this way - I'm not sure what to make of it. They seem to have not practiced any real police work, although if you Google "impersonating police officer" you can read articles for days on end. In Latin America and other parts of the globe, where there's a narco-state or some form of military fascism, often real or fake cops knock on the door of some "dangerous" journalist, book writer, or activist, and they're never seen again. So pretending to be a cop is an under-appreciated thing. But these Masons don't seem nefarious or after "I'm a bad ass you'll have to reckon with" kick. Nor do they seem to be trying to deal or score sex or drugs, although maybe we shall see.

It gets better when you realize one of the three was on staff for the California State Attorney General Kamala Harris.

They have a website. They protected - or planned to protect - Masons in 33 (there's that number) states, including Mexico, which reminded me of Emperor Norton of San Francisco, who was also Lord High Protector of Mexico.

There's something so cosmically hilarious about this it really made the day of an asthmatic down with a nasty case of bronchitis (me).

The line that they were "here first" smacks of either Art or Delusion, if there is any difference.

I was also reminded of Robert Anton Wilson's lines of thought about mass hallucination and things like money: the Mob can print $100 bills that take a group of experts to tell that they're not "really" money; the Federal Reserve can print money and it's okay. Only their paper is "real." Or: Andy Warhol signing his autograph on Campbell's Soup cans bought from the supermarket, immediately changing the can of soup to a Warhol with some value. How Elmyr got away (for a time) with forging all sorts of famous Modernist artists, and art "experts" were fooled.

The idea of a non-"legitimate" police force can be very serious. History is rife with brutal, fascistic, racist thugs pretending to act in the interests of the locals. But these Masonic cats seem to have done no harm, and in the glaring light being shone on "legitimate" taxpayer-funded Gestapo-cops all over Unistat over the past two years, I think I'd rather take my chances with a self-styled Masonic force with a "bloodline" (!) and no record of fascist, racist mayhem.

(Or: a "legit" cop, well-trained and sensitive to community standards and needs, with the use of force as last resort: gold! That's what I think most anarchistic communities would want...with total accountability for their status. And far far far less a number of laws to maintain. Is someone selling LSD? Okay, it better be up to community standards, pal!) 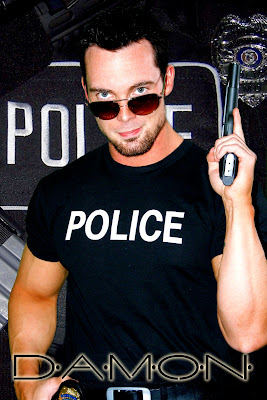 I hope more information comes out about this police force. My first guess is they're a very creative repressed people's movement, who want the feeling of dignity and participation in some noble process. And maybe free food at restaurants.

I hope they don't turn out to be criminals on the grift, 'cuz that would just be boring and ruin my buzz.

Finally, the Walter Mitty in me (and today I have a fever) wants to find out this is just the very tip of the iceberg: there really ARE multiple Masonic police forces, interested in Brotherhood and science. Ya never know! We Await Silently Trystero's Empire! DEATH = Don't Even Antagonize The Horn!