Going through some odd drug articles I stopped and re-read two from 2012, both addressing the idea of improving ourselves morally via neuropharmacology.

The first one was by Peter Singer (who in 2014 was the Swiss think tank Gottlieb Duttweller Institute's 3rd most important thinker in the world), and Agata Sagan, an independent researcher living in Warsaw, last I checked. She is very concerned about victims of repression and the idea of affective altruism. (See the article here, so you know I'm on the level.)

They address public acts of massive indifference to human suffering and why some people risk their lives to save strangers from things like burning buildings. The 1970s studies by Milgram and Zimbardo get mentioned, as do the seminary student experiments: on the way to give a sermon on the Good Samaritan, if the student was feeling rushed for time, they didn't stop to help a person lying on the ground, moaning. Demonstrations of empathy in rats? Yes. Then it gets good.

Singer and Sagan think we're getting to know about the brain to such a critical point that we might come up with a pill that will make us act with the better angels of our inner beings. We'd care more about others with this posited drug. We might not even have "free will" - they actually say this at the end of the piece - but we do need to think about the ethics of such a posited wonder drug: do we give violent criminals a chance to take it before locking them up? Do we - presumably the Police State apparatus now ready to lock in to pedal-to-the-metal Delirium Mode - monitor "pre-crime"? Do we go all out Gitmo-Dick Cheney-Clockwork Orange with those who some law and order types deem "potentially dangerous"? Would we implant a time-release device in the brains of psychopaths (like Dick Cheney?) to keep them from burning down the village for kicks? And if this miracle drug were good enough, would we still need religion?

Okay, here's the thing with great thinkers like Singer and Sagan: they're often far too straight. I mean, haven't they heard of Ecstasy? When the cops in Murrka found out about it, they made it a Schedule I drug (no known effective use, no known legitimate positive use, no research allowed without kissing our ass first). This despite a welter of scientific gnostics like Alexander Shulgin, Thomas and June Riedlinger, and Dave Nichols, testifying to its human benefit. The DEA's Administrative Law judge, Francis Young, agreed that it wasn't all that dangerous and in a 90 page decision, recommended Schedule III for MDMA/Ecstasy/Adam/E, etc. The DEA itself said "Fuck that shit: we're shutting it down: Schedule I." So much for sanity...

In my worst moments I fantasize about registered supporters of Ted Cruz and Donald Trump being forced to take an Ecstasy suppository, but then I'm just weird. Poetry made me that way. Blame it on, uhh...poetry. Yea.

To quote the great scholar of drugs, Dale Pendell, on this issue of outlawing Ecstasy due to bad information and scare tactics:

The clear message from the Drug Warriors is that they are not interested in peace, citizenship, or even tolerance. - PharmakoDynamis, p.216

Side Note: Israel and Palestine issues make me meshugenah and majnoon, respectively. It looks like there's no hope for a two-state solution, and the Israelis keep building the settlements. There seems enough people on both sides who want peace, but all it takes is some small percentage of bad actors. Or...what happened in Ireland between the Protestants in No. Ireland and the IRA? From Dale Pendell: "Ecstasy clubs in Northern Ireland were the first venue where Protestant and Catholic youths danced together. When footballers in England began taking ecstasy, violence plummeted. Everywhere it has gone ecstasy has been a catalyst for peace."

And no one was forcing it on 'em. Just let nature take its course. But first: get it out of the hands of the cops, and into the hands of researchers.

With the cannabis wars turning to the side of human decency (finally!), some of us might start reading up and getting in gear to re-legalize MDMA. 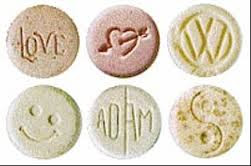 Now, also in 2012, I read this article from J. Hughes, the Executive Director for the Institute for Ethics and Emerging Technologies. Not nearly the luminary that Singer the Utilitarian is, but this article from later the same year seems more down-to-earth. Hughes - a bioethicist and sociologist - knows how oxytocin and testosterone and dopamine and serotonin work in studies having to do with antisocial behavior, crime, empathy, and religious ideation. It's a tad longer than Singer-Sagan, but well worth the read.

My favorite part was when he took on Jonathan Haidt's sociobiological intuitive morality ideas. Haidt claims to have been a liberal but now he's not, because of his research, which yield five human instinctual moral behaviors:

1. Don't hurt people
2. Don't cheat
3. Defer to authority
4. Favor your family/tribe over the Others
5. Stay sacred, avoid that which spiritually pollutes

I read Haidt's book The Righteous Mind and he's way up there on my list of the most overrated thinkers today. PBS did a documentary of Edward O. Wilson not long ago, and they repeatedly used Haidt to sing EOW's greatness, which I found nauseating. I think of Haidt as the real-life proponent of the mind behind the situation in Shirley Jackson's great and horrifying short story, "The Lottery." Haidt says fear unites us. Built into Haidt's bullshit evolutionary psychology of "morality" is this: well of course I don't like what he's saying; that's because I'm a liberal and liberals are blind to the last three of those five listed above. Not blind. We just don't place those values very highly at all. So: damn straight we seem "blind" to the natural goodness of racism, nationalism, deference to authority figures simply because of their authority, and we think homosexuals deserve equal rights, and women should be able to control their own bodies. If that's blindness so be it. I'm not having any of Haidt's crap.

(I've blogged on Haidt before, for instance HERE and HERE.)

And neither is J. Hughes, who sees "defer to authority" as anathema to progressive thought. Favoring your family/tribe can be re-worded as "racism, nationalism and nepotism are true, good and natural!" I take the avoidance of "spiritual pollution" to be akin to having a stick up your ass over other people's weird (and therefore "wrong") sexual proclivities.

For Hughes, any drug (or practice) that would improve our abilities to feel empathy/see ourselves in others and let go of the need to control others: liberal and voluntary. Why? Because the liberal approach to moral enhancement seems inherently minimal compared to the Haidt-people. Think of a politically powerful group who adhered quite strictly to Haidt's five above: do you think they'd endorse anything like Ecstasy?

That's a trick question, of course: we've obviously had those people in power, for a long time. Especially in the DEA. And look at how great we're doing!
Posted by michael at 3:06 AM

Fully agree with the drift of this BUT "When footballers in England began taking ecstasy, violence plummeted. Everywhere it has gone ecstasy has been a catalyst for peace" . Erm nope. Football players are regularly drugs tested. Its the FANS of such teams who took E, met each other in techno clubs, and then cut out the tribal violence that used to occur between fans of rival teams (often due to drinking vast amounts of alcohol, a depressant commonly linked to aggression and violence).

Great piece, as usual. I don't know if poetry made me weird or if my weirdness led me to poetry.

@Tony: Interesting. When I read Pendell's lines I glossed them as football FANS, and not the players, maybe because my subliminal reading apparatus-werkes are programmed to regard the idea that the PLAYERS doing E and getting less violent is an absurd idea. I don't even follow what we call "soccer" but I guess I never even considered the possibility that Pendell meant the players. Players in the major team sports in Unistat/Canada get drug tested too, but it's an arms race of sorts, as you no doubt know.

@Eric: Danse Macabre is my favorite book by Stephen King. I picked it up because I wanted to see what he had to say about HPL and his influences and acolytes. Pretty interesting. I remember following that with HPL's _Supernatural Horror In Literature_, which I think a marvel in itself. I even bought the Dover edition...because those are cheap.

Seriously, or jocoseriously: I think I was always weird. Poetry helped liberate me in this way. It's okay to be weird; we poets are weird too, dontcha know? Also, poetry HAD to have helped me articulate a lot of my weirdness in more fine-grained detail.

I consider Danse Macabre my favorite King book as well. I keep coming back to it. It has really affected my horror reading and watching over the past 35 years. It has also affected my teaching. I first went to the Lovecraft sections as well, and I also enjoyed Lovecraft's Supernatural Horror in Literature_.