Being of perennial impecunious means, I managed to land myself way up on the library lotto: I'm number 10 in line when Bleeding Edge comes in, and they're ordering a mess of copies. It won't be renewable, so I'll have to hunker down and read the entire thing in three weeks. I think I'm up for it, tanned, rested and ready...

Another of my dispersed Tribe alerted me to the Gothamist printing the first page. Because of the inherent mindfuckery surrounding Pynchon (he was once rumored to be The Unabomber, if he wasn't really J.D. Salinger or "Wanda Tinasky"), I suspected a possible hoax, but when the sentence "At the corner by long-implanted reflex she drifts into a pick..." I knew this was legit. "Drifts into a pick" matched my impression of Pynch's uncanny style/mind. Gawd, I can't wait.

In Conversations With Tom Robbins Robbins says that the FBI interviewed him after his book Still Life With Woodpecker came out, 'cuz the main character seemed like The Unabomber to them. (If you've read the book: Bernard Mickey Wrangle, AKA The Woodpecker, man!, see p.103) Robbins, on Pynchon's Mason and Dixon: "[It] knocked my socks off and I was barefoot at the time. Basically, it's an account of the professional problems of a couple of eighteenth-century surveyors. Yet Pynchon turns it into something thrilling and glorious by dint of his language and countless acts of his dare-deviltry. Mark Twain said the difference between a perfect word and a word that's merely adequate is the difference between lightning and a lightning bug. Pynchon generates one lightning flash after another." (see p.112)

Hey: now we find out another American genius novelist who has also written info-dense, 800-plus-paged works was under suspicion by the FBI as The Unabomber: William T. Vollmann, who I have yet to read. See his "Life as a Terrorist: Uncovering My FBI File." Sorry about the steenking paywall, but maybe that's enough. HERE's the LA Times on Vollmann's story. The FBI harassment of Vollmann is something I find extremely disturbing and deserves to be more widely reported. I also suspect Vollmann readers (one of the books at that Amazon link is over 1000 pages long, others 800, 600...) are a rarified class, and Vollmann's story in this, The Snowden Era, is yet another hint that we are approaching something between "Disneyland With The Death Penalty" Singapore (<---that line from William Gibson), and the old East Germany under the Stasi. Do structures such as we've found ever reverse towards something...saner? Give me one historical example.

Now I'll get darkly glib: I really don't think Vollmann is the sort of writer who'd go for this idea, but maybe the edgy, talented and still under-reviewed author should try falsifying some FBI documents that show that (s) he too was under suspicion by the FBI for some sort of Interesting Crime. Write a press release, call for a conference, announce your next book is about the deep structure of authors/publishers and publicity in the Information Age, and make sure you have all kinds of things to say about J.T. LeRoy and James Frey, Lee Israel, Mike Daisey, and AD Harvey and his series of fake academic identities and how he got many "experts" to believe his bogus claim that Dickens had met Dostoevsky. Talk about how, rather than being "outraged" we ought to consider The Trickster, human longing for public notice, and our accelerating susceptibility and vulnerability to the Hoax. There are relatively benign hoaxes, and there should be a reconsideration of their epistemic role in an age of not only information, but of rapid, no-end-in-sight income inequality, and furthermore there are plenty of very smart people who could not or would not make it in the Corporate State, and...well, you can see where I was going with this.

In The Essays of Leonard Michaels he writes of Spinoza, Shakespeare, Montaigne and Miles Davis as examples of artists-writers who want to "absent" themselves from their work, but their name is blaring due to this very fact. The totality of style and presentation, even without their signatures, seems like their face or fingerprints. How and why Michaels includes Montaigne there is beyond the scope of this blog, so you may have to check for yourself. (Sorry!) Thumbnail: these few artists seem to want to let the work speak for itself, without the built-up detritus of trivia and the gossipy-soul of People magazine. Or fer crissakes: TMZ. How disembodied Spinoza's mind seems when you read him. How radically multi-vocal Shakespeare appears. Miles famously played with his back to the audience. Etc. See Michaels, pp.176-178

A Salinger biopic is upon us; a few months ago Salon listed a Pynchon biopic as highly desirable, and I agree...but who - among those who really read Pynchon - would believe any of it? Do you mine his old friend Jules Siegel and flesh out the thesis that Pynch, like Kaczynski, was a product of an out-of-control CIA LSD experiment to sideline the counterculture in yellow matter custard, dripping from a dead dog's eye, while incense and peppermints scream across the sky? And then: the guilt over working side-by-side with Project Paperclip Nazi scientists at Boeing on ICBMs? The idealism he shared with Richard Farina thoroughly squashed, Pynchon retires to a shed deep in the redwoods overlooking the Pacific, smoking high-powered weed for two solid years, making notes, singing folk songs at small gatherings, having books sent in by odd couriers like something out of Tristero, flashbacks to his time in Manhattan Beach and Mexico. I see a Unabomber-like cabin deep amidst the ancient coastal redwoods in Humboldt County, with a table, a poster of Porky Pig, makeshift shelves with a few hundred books on them, including Helen Waddell's The Wandering Scholars of the Middle Ages and Kirkpatrick Sale's books and William Gaddis's The Recognitions identifiable for the freaks like us. Lots of notebook paper taped up on the walls with illegible notes, a page torn from the too-popular A Beautiful Mind. Another wall is covered with a gigantic map of the Louisiana Purchase, and the known routes of Lewis and Clark. An Olivetti on a table with a big bag of weed and a coffee maker. A voice-over of a phone call from a truck stop with Pynchon's voice as we heard it on The Simpsons "Yea the FBI was out here asking me some questions about my feelings about technology. The what? Did you say 'you're the bomber?' We have noise in the system here, they're probably tapping this. What unabomber? Who? Jeez, I need to read a newspaper I guess...(laffs) You mean you think they think maybe I'm blowing up park rangers? Doesn't anyone in the Bureau know how to read?(click)"

Get Oliver Stone to direct, what the fuck. I'm not saying a fascinating movie could not be made of such things, I'm just saying no one would believe it.

If Pynchon's Dys came out I'd probably even read that. Also see Michael Chabon's Maps and Legends, in which a Pynchon novel titled Blitz Nurse is cited. 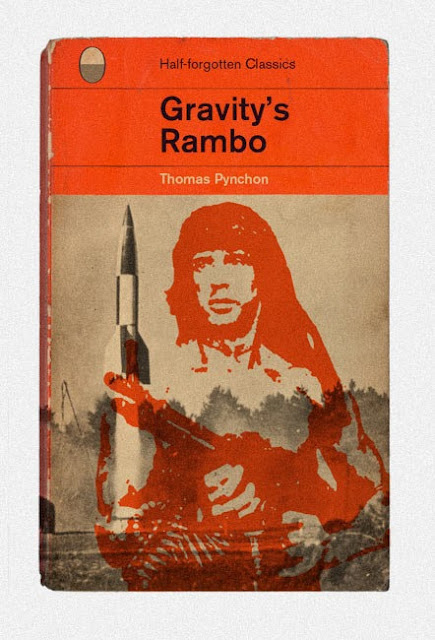 And I'm still on the fence about the Candida Donadio story, because the name seems too Pynchonesque. Yea, yea, I know: how could "she" put one over on NYT, plus Heller, Roth, Gaddis, Stone and Puzo and all those other writers had to have been in on it. Yea, yea: I've heard it all. I'm still not buying 100%.

Books and Articles Consulted:
On fugitive writings by Pynchon
William Pynchon
Angela Bishop Asks Paul Thomas Anderson A Really Stupid Question
Rodney Gibbs's essay on Pynchon's and Sale's musical Luddite satire Minstral Island
Schrodinger's Cat Trilogy, pp.364-365; 427
Pynchon likes The Daily Show
Pinch Thomas, major league baseball player from the Deadball Era
Chaos and Cyberculture, pp. 172-176
1996 TV interview: Kirkpatrick Sale on the Luddites
Proverbs for Paranoids:
1. You may never get to touch the Master, but you can tickle his creatures.
2. The innocence of the creatures is in inverse proportion to the immorality of the Master.
3. If they can get you asking the wrong questions, they don't have to worry about answers.
4. You hide, they seek.
5. Paranoids are not paranoid because they're paranoid, but because they keep putting themselves, fucking idiots, deliberately into paranoid situations.
-- Collected from Gravity's Rainbow, V237, 241, 251, 262, & 292
Posted by michael at 4:36 PM

Terrific piece. Stephen Colbert devoted a whole terrific show to Salinger last week. I find I laugh out loud more to Colbert than I do to The Daily Show these days, although I still prefer The Daily Show slightly.

Two days til the bleeding edge.

I saw the Colbert Salinger show.

His "Better Know A District" bits always made me LOL, literally.