I just found out Professor Lakoff had back surgery recently, and is getting around with a cane. I hope he makes a full recovery; he's one of the most important thinkers in Unistat, maybe the world, as far as I'm concerned. He's a tremendous thinker, a sweet guy, and Noam Chomsky's bete noir.

Right now, Lakoff is concerned that the Occupy movement doesn't know how to adequately frame their desires, wants, demands. (Hint: He thinks they should frame their patriotism.) But he has very recently contributed an essay addressing this very issue, which I highly recommend for my Dear Readers.

[Any readers who want to understand Lakoff's cognitive neurolinguistics on a deep level might want to get hold of the book he co-wrote with philosopher Mark Johnson, Metaphors We Live By. The same approach, but with a more laser-like focus on the Unistat political scene is Lakoff's Moral Politics: How Liberals and Conservatives Think. Also see his political-neuroscience book The Political Mind: Why You Can't Understand 21st-Century American Politics with an 18th-Century Brain. (That book has been reissued in paperback with a different subtitle.) For a very deep and epic heavy sled-run on the neuroscience underpinning all of this stuff, see Jerome Feldman's From Molecule To Metaphor: A Neural Theory of Language.]

Lakoff acknowledges forerunners of the thought-is-constituted-in-metaphors schema, but says only his (and Feldman's and many of their colleagues) are truly "scientific." The forerunners Lakoff has mentioned (in The Political Mind, first published in 2008) are Charles Fillmore, Erving Goffman, Ernst Cassirer and I.A. Richards (I wrote about Richards HERE); going back a bit further, Nietzsche (I wrote something as the OG HERE on Fred N). Going back the furthest, Lakoff tips his hat to Giambattista Vico (1668-1744). In earlier work, Lakoff has acknowledged the influence upon cognitive neurolinguistics such eminent thinkers as Wittgenstein, Edward Sapir, Benjamin Lee Whorf, and Lofti Zadeh. 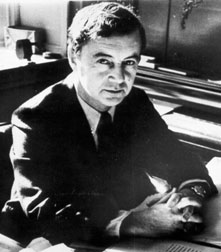 Maverick sociologist Erving Goffman, author of The Presentation of Self
in Everyday Life and many other mindblowing and readable books. His
central metaphor was All the World's A Stage. We assume roles, act our
parts, depending on the social situation, or framework we find ourselves in.

Keeping in mind Lakoff's recent essay for Occupy Writers, indulge me a bit and consider the use of language in class warfare (Marxist terminology is something Lakoff shies away from). A few blogs ago I pointed out that when budget slashing that would harm the non-rich the Republicans frame this as "reform." But when anyone suggests that the tax rates for the wealthy go back to the level they were in 1999, it is "class warfare."

Reading Lakoff and his influences my main model for why and how we are in this MESS we're in now is because the party that serves the 1% have a longer history of study and implementation of the most scientific uses of cognitive neurolinguistics...but they started to use knowledge about these largely unconscious processes far before Lakoff was studying the stuff, and it certainly wasn't called "cognitive neurolinguistics; rather is was called "advertising" or "Public Relations," or as the mandarin journalist Walter Lippmann called it, taming the Bewildered Herd.

The right-wing think tanks have been studying what amounts to Advertising and then applying it to politics; they've been doing it for a long time. Meanwhile the other parties that seek more parity? They speak in the patois of the educated, rational person. Indeed, they think like 18th century Enlightenment people, who believed in disembodied Reason, that if people could only know their self-interest they would Do The Right Thing, and that emotion has its place in life, but it really only gets in the way of Reason. They are the "egg heads" that a majority loathe, and tune out.

And now, with an explosion of neuroscientific knowledge, we know this is all wrong. Republicans speak using the patois of Reason also, but they do so with an idea that, as one of the founders of Unsitat, John Jay said, the owners of the country ought to run it. The best people have the most money. That sort of thing.

Lakoff has been at pains over the past 12-15 years trying to get the educated class to understand that most of the electorate are not primarily Rational Beings as Chomsky thinks, but bi-conceptual political beings: they are largely responsive to Strict Father frames of political language (see his book Moral Politics), or Two-Parent Co-Nurturing frames. Both frames are built on sets of metaphors that are physically instantiated in neural circuits. Probably everyone reading this, no matter what your political persuasion, can understand both frames, because we have experienced them over and over in our lives. This is a definition of Lakoff's "bi-conceptual." But one of those two frames tends to govern our political/economic/social thought more than the other, because of our life-experience, most of which was processed at unconscious levels. Lakoff has also been trying to get liberals to understand that the "conservatives" are way ahead in using this knowledge, and it's probably the main reason that so many of the so-called 99% vote for the interests of the 1%...

Lakoff thinks it's time the 99% wake up to frames, metaphors, and just generally using language and imagery to activate the neural circuits that articulate the values of equality, fairness, nurturing, and that aspect of freedom from.

If "The Empire never ended," it has largely been because those who best manipulate the symbols have been able to manipulate the land, capital, wealth, laws, rulers, etc.  So another way of framing Lakoff's "frames" is language as class warfare. Or Robert Anton Wilson's description of what Vico's linguistic theories were: "transpersonal linguistics." Or a rather blunt way to frame it: language as the tried-and-true Mind Control device?

This is, to me, the locus of the most radical aspect in our political world now. And it probably always has been. But now, as long as things are as bad as they are that people want to pitch tents in the hearts of the metropolises and get beaten by cops, it's probably about time more of them knew this stuff. Spread the word!

Anyway... Vico seemed to know all this, before the year 1750. More on that soon.

Here's Lakoff on conscious use of metaphors - framing - and how natural it is. 5 minutes:

Great post, Michael. Talking of Occupy's potential "demands", did you see this piece in the Guardian, from ZNet editor Michael Albert, suggesting "full employment" as a demand of Occupy?

I had NOT seen that. Thanks, Sue.

Lakoff's idea about refraining from amking explicit demands right now interests me. The appeal to patriotism of a sort We Love American and Want To Save It - is a vague, moral message. I see that. And I wonder how it would fly. Presumably you activate the circuits that make Kansans weep when they see the flag, etc? I wonder about the reisistance built-in by "conservative" TV watchers who are fed a steady diet of "San Francisco-lookin' hippies out there on the street waving the flag...look at those DISGUSTING weirdos! Blasphemy! To see these commie bastards say it's THEIR flag!"

I don't know. Lakoff makes sense here, but we'll se how it flies.

Full employment would require Congress and Prez to pass some sort of New Deal package. Even then, not everyone had a job. Until Pearl Harbor...

And even then: Neither Ms. Howard nor I want to work some make-work bullshit 8-hr day. I think we are both in the avant-garde: Give us a UBI and we will be free to do creative work, be happy, create TAZs, etc.

The concept of "job" is getting dicier for a lot of us, aye? We must push this notion of the end of jobs and a new way of thinking about money, value, work, and basic subsistence, safety nets, etc.

The Metaphors we live by seems like something that would resonate with my recent journey....

As does the " make work some bullshit 8hr day" as you know I just quit my recent shit fiasco in that.

I understand this post. For your readers- I'm not the sharpest tool in the shed- just the OG's youngie.

@CharlieJ: Take your time with Metaphors We Live By. When it "clicks" it'll open up a whole new world for you; if not, I will personally send you a partial refund of $5 that you can spend on your beer-making equipment, or guitar strings.

One request: no more "not the sharpest tool in the shed" lines here. You are one sharp tool, bro!

(Hey wait a minute: that doesn't sound quite right...)

In Tolstoy's words, "What then shall we do?"