I just saw THIS at HuffPo, and while dismayed (what? I still had some idealism left?), it does figure. To non-Unistatians, check out one of the "think" (and I use that word VERY loosely) tanks, the Heritage Foundation and what they stand for. You'll be informed that Google now is playing all sides (like oil companies and other multinationals), that the Heritage Foundation stands for just about everything I think is wrong with Murrrkin politics, and...probably something else.

But this all points to something I've harped on ever since I moved to Berkeley six years ago, from Los Angeles: it's damned near impossible to steer clear of contributing to the politically odious.

I'm on Blogger. That's Google. Oh, well...If you drive a car that uses gas: oil companies. If you use the financial system in any way...jeez I could go on and on; this is too easy and most of you are probably way ahead of me.

A classic Berkeley story from a dinner party the other night:

Oh, but let me back up a little. First, a bit of background about Berkeley for any friends/readers in other parts of the world: Berkeley considers itself VERY progressive and leftish, a rare thing in Unistat. (And in very many admirable ways, it is. But that's not my point here, now.)

We were all sitting around talking about mutual friends and how some of them seem to reflexively want to tell you about their new diet. Not that they're trying to lose weight, no. In Berkeley, ideological/political "purity" seems to exist as a very difficult yet obtainable goal. I've looked into that; it's a chimera.

Nope: Some friends want to tell you they're a vegan now when they used to be a mere vegetarian. Or vice-versa. Some will suddenly change the subject from something interesting to the personal information that, as of last Tuesday night when they saw a documentary on Third World living conditions, now they only eat certified free-range poultry, blessed by a left-wing rabbi. Or a Tibetan monk. Oh, so-and-so is now a flexitarian, a real backslider. Gee, thanks for that. To me, there are few things more boring than talking about your new diet and what you refuse to eat, and why.

So here's the anecdote: a friend recalls a recent potluck in which quite a lot of food was brought and there were many leftovers, and after the party, the hostess was trying to package plates of food so people could take some home. My friend asked if the hostess wanted to just keep the vegetables my friend had brought.

Hostess: Are they certified organic?

Hostess: Forget it. Take it away. 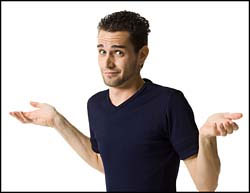 This dude seems to sum up most of what I'm groping for here.

The thing is, just as in the Bad Book, "There were giants in those days,"* today giants control almost everything - or far too much from my political stance - : the airways (have you seen how your cell phone provider has given to right wing/fascist politicians?), and just about anything you'd consume. And I personally see no reversal of this in sight. Au contraire: the right-wing move to "privatize" everything is going full guns. They call it privatization, because "government is evil, can't do anything right and private enterprise is much better; the American way." I call this bullshit on so many levels it will take a number of blog posts to enumerate how flawed this idea has already proven in practice. Also, instead of "privatization," I call it "privateering." Anyway...

What's so interesting to me is not that we vote with our pocketbook and we very often can't help but vote for people whose values we find putrid; it's the perennial quest for purity that so fascinates me. I find this admirable in some ways, and embarrassingly naive in others. It's a mixed bag. Choice - that aspect in the big bag of liberty and freedom - is quite often illusory. And, to me, this goes for the "choice" between Democrats and Republicans.

And purity? It would almost seem cruel to drop jokes on that, so I'll let it be. (Besides, Terry Southern did it far better than I ever could. Recall the "purity of essence"? The denial of "my precious bodily fluids"? See a 3 min clip at the end of this post from Kubrick's Dr. Strangelove if you don't know what I mean. Suffice and albeit: as much given an omnipresence of pollution and other corrupting elements, many of us seem to have a misplaced hierarchy of health concerns? Aye? Wot? Our big brains. Our big, hyperactive neocortices, abstracting about abstracting about abstracting. In a word: paranoia.)

Regarding this ideological purity, the Quest for a Chimera, I'm moved by the intent. I am not impressed by the hardcore ideological standards. It's naive and snooty, and epidemic in towns in which you find outstanding universities. Why?

Because educated young people sometimes "know" too much. (And I blame their professors for only 37.23% of that, btw. Ask me about math later.) That is, they "know" that which is dubious at best. Or they're partly or even mostly "right" but have lost too much perspective. (On some issues I think the kids in their twenties are in the vanguard, but that's for another blogpost.) And I think that's because it's the educated who feel very strongly about ideas that can become strong ideologies. Save the Whales didn't start with a bunch of 9-5 blue collar factory workers in the Rust Belt. These things start on campuses. Because that's where people are privileged enough to care about such things, and they will often give you staggering amounts of information and very persuasive rhetoric about why you ought to care, too.

Another way to put it: you can become well-off enough to worry yourself to death about things that most people in the world can't afford to even think about worrying about.

I've seen people camping out on Wall Street, and I'm with them in spirit; I admire the protesting gesture, and for their underlying ideas I have almost total sympathy. But I also saw THIS little item, and wondered which gesture was more powerful. I think the latter. But bravo to all. We need to pick our fights, enact our values with integrity...but fer crissakes! Let us keep our senses of humor! Without that, we have much, much, much less. Without our sense of humor, what do we have left?

I used to think Google was one of the few corps that were "good citizens." They were using their billions to find renewable geothermal energy sources, I thought. Was that just propaganda? Now we hear they are funding some of the worst America-hating, climate-denying, poor-hating political groups. I am disappointed. Yes, it's impossible to avoid such conniving corps these days, but I still think it's worth trying. Guess I have to say good-bye to my Gmail account. Where can get a socialy responsible email address?

They're doing what all the gigantic corporations do: covering all sides of politics, for the same reason a male dog licks himself.

Google has the money, it goes without saying.

I wouldn't drop the Gmail account for something else, as the Snowden revelations show it's hopeless, for many reasons...unless you want to learn encryption techniques.

There's some hope on the horizon, with stuff like this:
http://www.technologyreview.com/news/521676/online-anonymity-in-a-box-for-49/

I just rewatched "The Shining" a few weeks ago, and I plan to rewatch "2001" in January. Sight and Sound had nice Kubrick issue celebrating the 20th anniversary of "Eyes Wide Shut". I used to love Kubrick's films so much, and I guess I still do.