Earthquakes, According to Aristotle

[First off, my conspiracy hypothesis, tongue planted firmly in-cheek: The August 23rd earthquake centered in Virginia that put cracks in the Washington Monument? I think it was some delayed ju-ju action from Boobquake from sixteen months earlier. Follow the leads from here. You <ahem> heard it here first!]

I've been reading Aristotle's book, Meteorology, written a shade over 2400 years ago, and it's brilliant. Not because Aristotle is scientifically accurate (he's rarely even close!), but because of the quality of mind he brought to bear on such problems when actual science as we moderns know it - with doubt, testing of hypotheses, publishing your data so that others may seek to replicate your tests, etc. - didn't really get going for another 1800 or 1900 years after Aristotle died.

I was struck by his explanation of earthquakes. I grew up in the Los Angeles area, and now live in the San Francisco Bay Area, and I've lived through very many quakes. Many of us lifelong Californians mark times of our lives in relation to one of the big quakes..."When did she get finally get married? Good question...Well, it must have been early 1995, because I had just finished rebuilding my carport after the Northridge quake of 1994, that was January of '94 and the insurance took about 10 months to come through, and I recall seeing her say she was getting married..."

If you were near the epicenter, the extreme event tends to indelibly stamp your neurons: you remember where you were, who you were with, what you did for the next 48 hours, how the weather was that day, etc. It's similar to people who were old enough to remember when JFK was assassinated, or 9-11 for Unistatians, or when they rolled out New Coke. (<----joke stolen from Robert Sapolsky)

Aristotle addresses quakes first by naming three philosophical predecessors who gave explanations for the occurrence of quakes, and tries to keep from making fun of them. Anaxagoras, Anaximenes and Democritus and their explanations were hard for Aristotle to take seriously. He explains what Anaxagoras thought in a very short paragraph and then says, "This theory is perhaps too primitive to require refutation...," adding that Anaxagoras didn't even account for why some countries or seasons have earthquakes. Aristotle's predecessors all name water or ether or maybe fire as the cause. The translator of my copy even uses "absurd" in Aristotle's dismissals of his predecessors.

For Aristotle, it's all wind. He had already proven that wetness and dryness require evaporation. Water from rain gets into the earth; the earth must exhale and evaporate, then. The sun penetrates the Earth and causes evaporation, which means wind. Wind is the "greatest motive force" because it's "rare" in that it can move through things, it's very fast and therefore violent. Solid logic! And yes: winds move underground. When a very large amount of wind gets built up inside the Earth, is must burst forth. This causes earthquakes.

Aristotle - "The Master of Those Who Know" for much of Western history - says the severest quakes happen at night, because it's the calmest part of the day. Why? Well, because when the sun is shining it exerts its full power, trapping the winds inside. At other times, he seems to hedge on this dynamic, but nevermind. Spongy countries - places on and in the earth that have lots of rainfall and moisture trapped beneath - are "exposed to earthquakes because they have room for so much wind."

Here's a telling passage and key to Aristotle's brilliant metaphorical thought: "For the same reason earthquakes usually take place in spring and autumn and in times of wet and drought - because these are the windiest seasons. Summer with its heat and winter with its frost cause calm: winter is too cold, summer too dry for winds to form."

We must cut Aristotle some slack because his view of the world was pretty much - literally - "Mediterranean": the "middle of the earth."

My favorite passage from Aristotle on quakes is this, which I felt coming on before it actually came to pass:

"We must suppose the action of the wind in the earth to be analogous to the tremors and throbbings caused in us by the force of the wind contained in our bodies. Thus some earthquakes are a sort of tremor, others a sort of throbbing. Again, we must think of an earthquake as something like the tremor that often runs through the body after passing water as the wind returns inwards from without in one volume." (For Aristotle on earthquakes, see Book 2, chapters 7 and 8 from Meteorology.)

Methinks this was the true starting point for Aristotle's thinking about the cause of earthquakes, and he merely buried the lead. You have to read ten or twelve paragraphs before he relates that which happens on the macro scale to that which happens inside us, on the micro scale. As above, so below...and Aristotle is usually not thought of as a Hermetic thinker. (Rabelais had a lot of fun with these ideas from Aristotle! All you need is a character who is a giant, even "gargantuan," a large portion of food for the giant, and then flatulence that wipes out entire towns, much like certain hurricanes recently in the news. No seriously: Rabelais's "Gargantua" goes to "make water" and floods an entire village: you undergrads who skip through that part are really missing out!)

Anaximenes, Anaxagoras, Democritus, and Aristotle and their ideas about what causes earthquakes? These would constitute a sort of imaginative "guess," or what Charles Saunders Peirce called the logic of "abduction."

This level of explanation brilliantly demonstrates the most cutting-edge cognitive science from the year 2011: we think based on our own embodiment as beings that have evolved in a particular way, and most of our "thought" is not conscious. If we want to figure out the causes, the "why" of some mysterious problem, a reasonable place to start is with what we know: our sensations and experiences as the sort of "featherless bipeds" that we are.

[In this mode of thought the being often named as "Yaweh" in the Old Testament? The one who acts like a two year old? We can understand where "He" came from!]

Plate tectonics, continental drift, the basic theories of Geology: these ideas, this knowledge took a long time to develop, for good reasons: the dynamic actions of the moon and tides, the molten core of Earth, seafloor spreading, how weather really works: our bodily flatulence and need for elimination were only going to take us so far in our explanatory schemes. Once enough odd men and women began looking outside the body for reasons why earthquakes and other geological phenomena occur, armed with a scientific method, many scientific revolutions followed quickly, one upon another. Science is not personally intuitive, in general; it is an attempt to get at a reality that is not only stranger than we had imagined, but perhaps "stranger than we can imagine," as one early 20th century thinker* said. 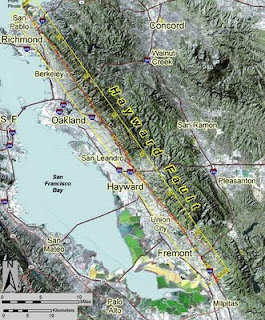 I live on top of a big earthquake fault that is about nine and a half months pregnant. This we know. A Big One is due any day, but on geological timescales in this sense, about a 95% chance of the Big Baby due within the next 30 years.

Why do I live here? Good question. On one level, it's sort of crazy, because I knew full well about the fault under the house. And I knew it was due. The thing about quakes and the areas in which they are frequent over relatively large timescales: quakes create beautiful landscapes. What a cosmically vicious paradox! If you've been to San Francisco or only seen pictures of it, it's a beautiful City, a gorgeous area.  I often find it breathtaking. And it's right on the edge of two very big earthquake fault lines: the San Andreas and the Hayward. I live atop the Hayward. I know it's crazy, but I'm just hoping we're prepared and lucky when the Damned Thing hits!

A less than 3-minutes video on the whole lotta shakin' that will be goin' on:

* J.B.S. Haldane: "Now, my own suspicion is that the universe is not only queerer than we suppose, but queerer than we can suppose. I have read and heard many attempts at a systematic account of it, from materialism and theosophy to the Christian system or that of Kant, and I have always felt that they were much too simple. I suspect that there are more things in heaven and earth that are dreamed of, or can be dreamed of, in any philosophy. That is the reason why I have no philosophy myself, and must be my excuse for dreaming."
— J.B.S. Haldane (Possible Worlds: And Other Papers)
Posted by michael at 12:44 AM

The earth will shake.