Bohr (1885-1962, Nobel Prize Physics 1922), the Great Dane, one the main constructors of the most successful physical theory mankind has ever come up with, the quantum theory, was an enigmatic personality, and anyone wishing to delve deeply into how physics, psychology, language, philosophy, and "reality" all commingle will be repaid by reading in the numerous well-written versions of Bohr's life upon the 20th century scientific stage. In the past year I've at times mired joyfully in Manjit Kumar's Quantum: Einstein, Bohr, and the Great Debate About the Nature of Reality; a challenging graphic novelization of Bohr called Suspended In Language; and a few others, but most fruitfully, Niels Bohr's Times: In Physics, Philosophy, and Politics by Bohr's physicist friend Abraham Pais, which may be the ultimate biography of Bohr so far.

Ever since Bohr could remember he was interested in philosophy, "to dream of interconnections." Soon after, still as a boy, he found himself dizzy from contemplating the nature of language and the problem of making communication free of ambiguity. This would inform his interpretation of quantum mechanics, an interpretation which stymied his friend Einstein over and over. Einstein, as most of you know, did not like the indeterminate, statistical nature of physical reality at its atomic and subatomic levels. There must be something wrong with quantum mechanics, it must be incomplete, there must be something "solid" at the bottom of reality. But Bohr's Copenhagen Interpretation held sway. 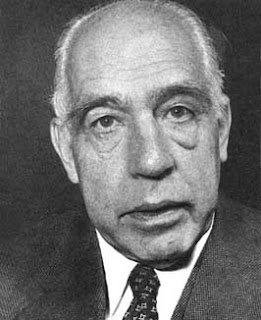 Bohr chose the Taoist Yin/Yang symbol for his coat of arms.

Starting in the late 1920s, at every conference in which Bohr and Einstein met, Einstein had concocted an ingenious gedankenexperiment (thought experiment) that would baffle Bohr and force him to admit the quantum theory was incomplete. Bohr would listen to Einstein and become vexed. While others went off and mingled, joked and carried on conversations over drinks, Bohr would retire to his hotel room to try and deal with Einstein's latest thought experiment...and he always succeeded in answering Einstein's objections! (Except for maybe that one EPR thingy....)

In 1927, Bohr thought his interpretation - which included Heisenberg's famous Uncertainty Principle - was right. His basic idea was the principle of complementarity. Physicists had been troubled by the fact that, when they tried to find out if the nature of light was particular or wave-like, they found that it was both! It depended on the way the experiment was set up. Most physicists thought they needed to find the one best way to set up an experiment to see, once and for all, if light was "really" a wave or if it "really" came in particles. (A few creative types posited that light was a "wavicle," but few in the physics community were satisfied with this.)

Bohr said: no matter what you do, you will never come to a proof that it's waves or particles. He was convinced that waves and particles were complementary phenomena. And so was almost everything else.

Here's Bohr, giving a thumbnail version of the Copenhagen Interpretation of the quantum world of nature:

"There is no quantum world. There is only an abstract quantum physical description. It is wrong to think that the task of physics is to find out how nature is. Physics concerns what we can say about nature."

When I first read this, my mind went in seven directions at once. To this day, I still marvel at this conception, which is still probably the most "conservative" interpretation of quantum physics, and the one most commonly held by physicists, probably...That is, if those physicists working on solving problems involving the quantum level think at all about the implications about what the equations imply about Nature; at least one generation of Unistatian physicists were trained and encouraged to NOT think about the philosophical implications, as I touched on HERE.

What Bohr seems to be saying is that we can't know about Nature. Or rather, what we say about our findings using our best instruments and minds only says what we can say about how we've decided to model nature, not what it "really" is. We can only describe what our instruments and nervous systems and mathematics register about our conceptualizations about nature. We are inextricably one-remove from any sort of "ultimate physical reality," and indeed, we cannot know if even that exists. We either made that notion up at some point, or it was a holdover from our thinking as evolved apes. When we use our best conceptualizations, and no matter how indeterminate the equations were, the experiments "work" the way we think they should work, and things don't fall apart suddenly: it's as good as we can get. And it's been pretty damned good. Best physical theory EVER! But: undergirding it all is statistical probabilities. We don't know how Nature operates for "sure." (Yet? No. Bohr is saying we can't know. And he's okay with that. Are you? Why does it "matter"?)

Every notion that we have about anything is a map, and there are relief maps, political maps, Mercator projections, globes, population-diffusion maps, agricultural maps, weather maps...you can think of many, many more. We all inherit versions of map-models about "reality" from our local culture. Some of us extend knowledge and create new maps, to help us think about some small corner of "reality" in a new way. Maps are always in flux in space/time/quantum "reality."

Looking at things, observing them, changes them. At least at the atomic and subatomic levels. Maybe it works on macro-levels too...

Bohr continued to write and talk about complementarity throughout his life, both in physics and in other domains of life, such as biology, anthropology, language, and psychology. In 1957 he gave a series of lectures at M.I.T, and the first one was titled "The Philosophical Lessons of Atomic Physics." He stressed the complementary principle, and his friend and biographer Abe Pais thinks Bohr might have gotten the notion from the American pragmatist philosopher William James, who had used the term "complementary" in a similar way in 1891, many years before Bohr had started to use it, and Bohr is on record as admiring James: "I thought he was most wonderful." Bohr also admired Lao Tzu and Buddha, but not most Western philosophers. He admired fellow Dane Kierkegaard's language, but not the thought so much.

Many academic philosophers commented unfavorably about Bohr's "complementarity" and Bohr said they didn't understand it.

Some physical and more everyday examples of complementarity:


In a similar way that pragmatism has been called an "anti-philosophy," Bohr's "complementarism" (Pais's term for Bohr's philosophy writ large) also strikes me as being at-odds with the Western tradition of philosophy. Pais quotes Pascal, saying he thinks Bohr would agree: "To ridicule philosophy is truly philosophical." (Pensees, Part VIII, #35)

I like this passage from Pais's biography of Bohr:

Many people were baffled by Bohr's complementarisms, and he acknowledged this and said that they were "seeds for thought." Here's one of Bohr's favorite story-jokes:

"Once upon a time a rabbinical student went to hear three lectures by a famous rabbi. Afterwards he told his friends, 'The first talk was brilliant, clear and simple. I understood every word. The second was even better, deep and subtle. I didn't understand much, but the rabbi understood all of it. The third was by far the finest, a great and unforgettable experience. I understood nothing and the rabbi didn't understand much either.'" (Pais, 439)

However Niels Bohr fits into the history of thought, his predecessors and especially those who were influenced by him, have greatly influenced my quasi-stances on just about everything, leading, for better or worse, towards some state of overweening generalism.

For 6 and a half minutes, here's some viddy on how the Bohr model of the atom got going, etc: