Here's a cultural trend: simply pull a day or month out of your butt and proclaim it's National What I'm Interested In Day! Or note well that a pulchritudinous and brainy babe named Cara Santa Maria over at Huffington Post has proclaimed November "Sexuality Month." Apparently by fiat. Note: I'm not complaining, just observing.

You go ahead and try it: do you own a business that's hurting in this endless recession? Hey! Get out the word that December is not only Christmas and Hanukkah and any number of originally pagan Winter Solstice post-harvest days of celebration...but it's Change Your Automobile Oil Day too! Other lube experts will nod in agreement, and you never know, it might go viral. Next March 10th is Used and Antique Furniture Appreciation Day, so go out to your local shops, folks! Make a night of it! Numerology reigns supreme on 11-11-11, and I've read of one small business owner who plans to open his store at 11:11AM today. Other couples chose the day to get married. Lest we forget: the Great War's armistice was at 11AM on 11-11-1918...

Some people at Viacom-owned TV channel VH-1 a few months ago decided that the upcoming 11-11-11 would be Heavy Metal Day. Nothing but metal today, folks!

Sure, it's a crass corporate promotional ploy dreamed up by marketing guys, but I like metal, and if you think I'll let this go well man you've got another thing comin'. The end of Daylight Savings Time arrived earlier this week, so now it starts to get dark at 5PM here in the San Francisco Bay Area. The weather has been cold, more rain is coming, baseball is over...now is the time I usually play a lot of baroque music: Vivaldi, Handel, Scarlatti, Corelli, Tartini, Telemann, Zelenka, Couperin, but especially the deity Johann Sebastian Bach. I've long associated the shorter, colder winter months with baroque music. I listen to all kinds of music, but since my early twenties I've associated Bach and the 17th century boys with what we call "winter" in California. But for 11-11-11 it's all screaming metal for me. By the end of today I will have listened to my favorite Megadeth. I think I'll pull out UFO's seminal Strangers In The Night CD. Where's that Voivod? Hell, maybe even Black Sabbath's first record...I will probably not be listening to a band that sounds like the singer is a cross between Cookie Monster and Sam Kinison, but that's just me. I'm more about the firebreathing virtuoso guitarists. C'est la vie and de gustibus non est disputandum. Or however that stuff goes. 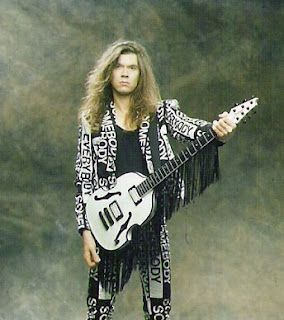 Paul Gilbert, one of the great virtuosos of metal. He has a geek's sense of
humor and is a teacher of great renown. He painted those f-holes on, I'm
pretty sure of it.

A Few Words on Metal Books for Geeks
Apparently to some, it's sounds odd when I assert that a good chunk of metal has been heavily influenced by baroque music, but if you want exhaustive proof see Professor Robert Walser's book Running With the Devil: Power, Gender and Madness in Heavy Metal. Walser - a PhD in Musicology - shows elaborate comparisons between solos by Ozzy Osbourne's fiery guitarist Randy Rhoads and the innovative Edward Van Halen and arpeggiated progressions from the likes of Vivaldi and Bach. Walser's book is probably the geekiest book on metal I've seen, but there are a few more books on metal for geeks I'd like to mention.

Sound of the Beast: A Complete Headbanging History of Heavy Metal by Ian Christe gives a pretty good survey of the history of metal, and does a terrific job of showing how, starting in the 1980s, the metal universe went supernova, with genres splintering off like chaotic flying shrapnel all over the place: thrash metal, speed metal, death metal, black metal, progressive metal, Nu-Metal, shred metal. The book is copyright 2003 and metal is still evolving, mutating, and experimenting and cross-pollinating with other forms of music, so we must always see the word "complete" in a title as a bit of premature gesticulation. Nonetheless, Christe is one of the best writers on metal. His scope is encyclopedic, he writes well, he's not afraid to be opinionated, and he's a terrific, incurable list-maker, which is fun.

Deena Weinstein, Professor of Sociology at DePaul University in Chicago, has gone into nth printings of her Heavy Metal: The Music and Its Culture, which rivals Walser's book in its intellectual approach, which is deeply sociological, steeped in her Simmel, and she draws on postmodern texts such as Dick Hebdige's influential Subculture: The Meaning of Style. Weinstein appreciates metal deeply, at one time wore a black leather jacket to her lectures (maybe still does), and has given a reading of the music and cultural style of metal an analytical depth that will be a challenge to any subsequent writers coming at it from this angle. Not an easy read, but a delight to metal intellectuals.

Mean Deviation: Four Decades of Progressive Heavy Metal, by Jeff Wagner, arrived earlier this year and was the best book on music in any style that I've read during calendar 2011. Wagner had been listening and writing about metal for a dedicated small following in Metal Maniacs magazine for a long time; he got out of the magazine biz and holed up in a rural house in the American south, and wrote this engrossing book. Wagner is the sort of writer who knows and loves his subject so well that it's infectious. I could see Musicology professors enjoying this book, if only to get a clue about this rich and deep and odd area of music. The supernovae of different metal genres I noted in Christe's book? Wagner amplifies greatly on much of Christe; these two books seem wonderfully complementary. Wagner is most interested in the metal bands that continued to "progress" and try new things. I was enchanted reading about bands I hadn't known anything about, like Opeth or Celtic Frost, and how they evolved. Often the players just practiced so much that 13 months after their last record, suddenly they sound like a different band: odd time signatures, a faster and more melodic lead guitarist, abrupt tempo changes, etc. Or suddenly the band fell in love with old Pink Floyd records and now the music reflects their influence. One learns not only who the Big Four of Thrash are, but who are the Big Three of Prog-Rock? A: Dream Theater, Fate's Warning, and Queensryche. Which I did not know until I read Wagner.

For the ultimate conversation starter among metal heads, you must see Joel McIver's The 100 Greatest Metal Guitarists. McIver, the most prolific writer in metal - and a high-quality writer he is too, a real digger-ant who does his research and wears out lots of shoe leather in getting interviews - knows how to get metal heads arguing about who's the best. He knows that "best" is subjective, so he says at the beginning of the book what his criteria is. It still seemed too arbitrary to me why Rhoads, Van Halen and Malmsteen were "hard rock" and not metal, but nevermind all that. As the book - copiously illustrated - counts down from 100 to numero uno, the articles on each player get longer. I have not met one metal head who agrees with McIver's selection for #1, but I have complete respect for McIver's metal esthetics. This is a fun, well-informed book.

Will 11-11 "Stick"As Metal Day?
Maybe. Did Secretary's Day stick? I don't know, but probably in the world of secretaries it did, somewhat. Corporations have a lot of power, but I tend to think these holidays/memorials that "stick" come from something indigenous; they are in the soil and bread where the folk live and eat and breathe. I'm glad that a cartoonist's idea of Sadie Hawkins caught on, or my first date would've happened much later. I'll go off here and speculate that a new holiday/memorial that sticks only does so because of the software of the day's idea runs compatibly on the hardware of the culture's paideuma. My guess is that 11-11 will probably live on, at least for a few years, as Metal Day. After all, there are a LOT of metal heads, from 15 year old girls who listen to Motley Crue to 55 year olds in Dockers who imagine they are world-class shredder John Petrucci in some other world.

The Ironists among the metaloids have re-named the day Nigel Tufnel Day, after the Christopher Guest character from the immortal Spinal Tap, who had an amp made that will go up to 11, one better than his rivals' ten. Others think the late metal god Ronnie James Dio was the embodiment of the sign of 11, with his index and pinky fingers-raised "devil's horns" sign, which Dio once explained he got from his Italian grandmother, who imported it from the old country: it was the malocchio, or Evil Eye, that was being thwarted by such a gesture. Apparently the Evil Eye goes back to classical Greece. There is a funny dissenter towards this Day of Metal, John Serba of the Grand Rapids Press.

My friend Brian Shields is a metal head par excellence, and his avant leanings are on display HERE.

Shields is also an adept punster and wordsmith, and he never told about this piece (that I remember), but I found it accidentally. I end this blogspew for Metal Day with Shields's "Less Successful Heavy Metal Wedding-Tribute Bands" HERE.

Megadeth: Dave Mustaine on vocals and lead guitar; Marty Friedman (flannel shirt), the master of odd intervals and exotic scales in metal, doing most of the lead breaks. He's incredibly articulate, operatic, firebreathing, and has an impeccable vibrato. Friedman shreds in Hungarian minor, with diminished 7th arpeggios flying by, and the Phrygian major scale adds to the esoteric theme of the song, about the famous Hangar 18 of conspiracy theory lore. Unadulterated metal from Megadeth's best lineup:

Somehow I think of Opus in Leopold Bloom County who considered music with a lot of tuba "heavy metal." (I have Brahms' Second Symphony on right now.)

I plan to listen to one of Beethoven's 32 piano sonatas today and contemplate Joyce's use of 11:32.

I might play some of Uli Jon Roth's interpretation of Beethoven. Or Ritchie Blackmore's "Difficult To Cure."

"Like what you like, enjoy what you enjoy, and don't take crap from anyone." - Damned Old Crank