, by Dale Pendell, which recounted long conversations Pendell had had while taking extended hikes with the legendary intellectual Norman O. Brown through the hills and meadows and forests in the general area of University of California at Santa Cruz, where Brown had taught since its inception. Pendell had studied under Brown, and there are some golden passages about book-talk, but what made me laugh was Pendell's idea of "biblio-osmosis": when you obtain a book and seem to think that simply having it on your shelf is good enough for you. Some part of your mind thinks somehow that you will absorb its vibrations at night in your sleep! I don't think I've ever consciously thought this, but I do catch myself feeling more secure when I have copies of books I want to "know" or know better, on the table next to my bed.
-------------------------------------------
Speaking of Dale Pendell, I read something in his marvelous book on drugs, Pharmako/Gnosis

, that bothered me, because it's apparently a precedent in law: "One's personal library could be used as evidence in court." This set my mind to imagining all sorts of scenarios (this is all part of the reason the "Circe" episode in Ulysses

resonates for me?) where I'd have to answer to just "why" I had in my possession some books on anarchy, or Mein Kampf, or my at least 50 books on drugs, or maybe even something that was deemed "pornographic." My basic answer would be on First Amendment grounds, but the deeper reason is that I'm one of those Walter Mitty types who loves to have "forbidden" or "dangerous" books around; I want to read books by crazy people, people whose ideas I find abhorrent, or people whose lives or advocations are thought so out-of-bounds that I catch a bit of their aura just having their books on my shelves, much less paging through them. I love crazy ideas; I want to know what it's possible for others to believe. I actually read something like The Turner Diaries

(which I own; it's on my shelves next to Hitler), None Dare Call It Conspiracy - a John Birch Society favorite - something called How To Start Your Own Country, Trilaterals Over Washington, The Occult Technology of Power, a copy of the Koran and The New Revised edition of The Bible (my own little personal in-joke: juxtaposing the Holy Book with Hitler, et.al), and something called The Malleus Maleficarum,

or "hammer of witches;" this book was used as a how-to for Inquisitors. I read things like The Turner Diaries and try to get into that "reality tunnel."...Even though the characters - and the militias that love that book and use it as a sort of roadmap or Bible - would want to kill me; I'm every thing they hate. (And boy! Do they ever hate!)

, by Luigi Serafini. When in Tokyo in late 2000 I was visiting a friend of a friend and he had this book, which I'd never heard of. He took it off the shelf and said, "Check this out." And I was transfixed. It's a modern book, and we know about its author and provenance, but as I paged through it, marveling at its gorgeous weirdness, I thought of my readings of the mysterious Voynich Manuscript 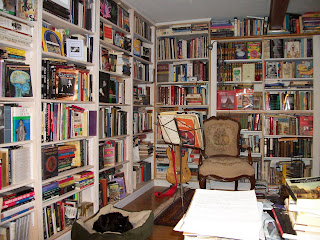 Note Mr. Jinx, my 16 year-old black cat, sleeping in the foreground.
------------------------------------------
There are two kinds of responses I get when a visitor enters my modest library, and they precisely match the ones that Nassim Nicholas Taleb relates about the visitors to Umberto Eco's massive personal library.  Eco has around 30,000 books in his home library, and guests, upon seeing the books, either say something like this: "Wow! Signore professore dottore Eco, what a library you have! How many of these books have you read?" Others, "a very small minority - who get the point that a private library is not an ego-boosting appendage but a research tool..." - see Taleb's The Black Swan


Taleb, who seems to me of the intellectual firepower-calibre of Eco, says "The library should contain as much of what you do not know as your financial means, mortgage rates, and the currently tight real-estate market allows you to put there. You will accumulate more knowledge and more books as you grow older, and the number of unread books on the shelves will look at you menacingly. Indeed, the more you know, the larger the rows of unread books. Let us call this collection of unread books an antilibrary."


So, I have something of an antilibrary going, and it is intertwixted and intertwingled with books I'm very familiar with. Most of my books were bought used, because, as I said, I'm in a chronic penury. But I hope things will start to pick up. But since reading Taleb on Eco, I feel less guilty about those unread volumes on my shelves, and more like they are a "research tool."
-----------------------------------------
Speaking of hope, Woody Allen tells us:

I love libraries. Reading a lot of Phil Dick in the 90's, I imagined getting a team of multilingual astral projectors together to visit the ancient library of Alexandria.

I loved the Star Trek episode about the library which sent people back in time - perhaps the first episode I ever saw.

My library has dispersed. I've give away a lot of it; I have some at home, some at school, some in storage, etc.

Last night I visited the RAW shelves of my library at home looking for books with a seven fold structure, finding Sex, Drugs and Magick, Ishtar Rising, and The Earth Will Shake, an interesting trio.

What about Empson's Seven Types of Ambiguity?

Whenever I think of the Alexandria library, a little part of me mourns.

I think of public libraries as an extension of my own library: the overflow is too much, and it's good to house all that stuff in other neighborhoods; plus I like the fact that my fellow citizens have access to the info and wonders in "my" books.

I hear there are two or three "Discovery Channel"-like shows about people who are hoarders. It's hot not. Well, the ONLY things I've ever hoarded were books.

It has not yet reach the level of "problem" but I do worry about them all burning in this area, which is subject to catastrophic firestorms, most notably 1991 and 1923...Oh, and it would suck to lose the house too.

I - naturally - liked the idea of an "anti-library."

I have the Empson book in my classroom - I've never finished it. Markov Cheney reference that, I think, in Schroedinger's Cat.

Oh yeah, I reached 1928 in my chronological trip through film history, the year of Chomsky's birth (and Phil Dick's).

Back in the early 80's as a math major I took a class on formal language theory in the ASU math department which mentioned Chomsky quite a bit. I loved that class. The class started out with about 30students, almost all of whom failed the first test (including myself). All but five of us dropped the class, and then it got cool. I think it spoiled me for a career at IBM. I felt in that class that I had finally begun to "do" math. The next semester I had a differential equations class filled with engineering students, and I could not make myself do the homework. In my usual snobby way I looked down my nose at plugging values into equations. I lost interest in a career in computers, mentally wandered for a few years and ended up an English major.

What happened during the Wander Years?

@Royal:
>Oh yeah, I reached 1928 in my chronological trip through film history, the year of Chomsky's birth (and Phil Dick's).<

During the Wander Years I read a lot of RAW, Leary, Pound, etc., wrote a lot of poetry, and listened to a lot of the Art Ensemble of Chicago, and my grade point average fell precipitously.