Fair warning: I take class warfare as basic and ongoing from the time just before history, as the earliest historians tell of legendary figures involved in striking a blow for the little guy, or of some Draco making everyone's lives miserable-unto-slavery, except for his buddies with all the wealth.

Most of you probably know of these famous passages from early Marx:

"We rarely hear [...] of combinations of masters, though frequently of those workmen. But whoever imagines, upon this account, that masters rarely combine, is as ignorant of the world as their subject. Masters are always and everywhere in a sort of tacit, but constant and uniform combination, not to raise the wages of labor above their actual rate [...] Masters too sometimes enter into particular combinations to sink the wages of labor even below this rate." Marx soon after notes there is an inequality of access to legislative protection: "Whenever the legislature attempts to regulate the differences between masters and their workmen, its counsellors are always the masters."

And isn't it great things have changed so much for the better?

And I hope some of you were not taken in by my pulling a fast one: that wasn't Karl Marx, but the capitalist's own man, Adam Smith. See Book One, chapter 8, "Of the Wages of Labour," from The Wealth of Nations

. Marx admired Adam Smith; Smith's writings are pre-capitalist. Smith posits a rationalistic account, based on much empirical observation, of how to improve economics.


But in my lifetime, it's been more than ten times when some college-educated right-winger has told me, with variations, that Marx is my guy, and Adam Smith his. After reading both, I have major doubts these half-smart and well-fed and well-dressed college boys ever read a word of Smith. He seems to be some sort of Holy Writ among Business Majors: you need only know He was on Our Side.


Adam Smith (1723-1790, one of several brilliant Enlightenment thinkers who were Scottish. Here's the old wig now: 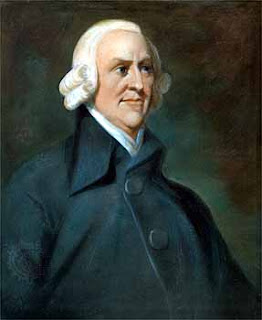 If you haven't read Smith, I highly recommend dipping into him now and again. See if you don't agree with me that he would have nothing to do with the way economics is done in Unistat, especially since 1945. If you want to argue that Smith is your "free market" guy, then go ahead and do so. I'll show you why you're completely full of shit. Anybody wanna debate me on this? Bring it on! Do yourself a favor and cling to your Milton Friedman...(Oh! But why would anyone dippy enough to claim Adam Smith for the current day Republican party be reading this blog? No one reads it as it is...except you. Bless you!)
-------------------------------
"Conservatives say if you don't give the rich more money, they will lose their incentive to invest. As for the poor, they tell us they've lost all incentive because we've given them too much money." - Professor George Carlin, Braindroppings

, p.193
---------------------------
Unthinking: money is wealth. No, money is about, as Buckminster Fuller said, "sustainable forward days of survival." Money merely represents possible wealth. It is a ticket for the transfer of wealth. As Robert Anton Wilson said, "If all the money disappeared overnight, the national standard of living would not change (whatever happened to individuals in the interim)." But wealth is anything that is a good: roads, your furniture, air conditioning, food in the cupboard, a bridge to get you over the river safely to where you want to go. Note well that all of these things came from somewhere; someone had to make them from natural resources, or grow them: humans with their accumulated know-how (knowledge which can be represented on paper but can most often qualify as "metaphysical") are the true source of wealth. If you were in a plane crash with Bill Gates, and you found yourself sharing a rapidly leaking life-raft with him in the middle of the ocean, and you had somehow managed to grab a life-vest but Gates had not, and he offered you a billion dollars for your life-vest...how much is his money "worth" then? (Consider this a koan.)


Think of the Arabs before western know-how about geology and means to determine where oil was. The Arabs were "poor." Then, when they learned how to extract the oil from under their land, they (some but not all) became "rich." It was the metaphysical knowledge (which translated into physics) which made all the difference.


A tremendous 19th century generalist, John Ruskin, coined a third term: illth. Would it serve us to start thinking of "illth" in addition to money and wealth? I think so: illth can be defined as all the changes in our environment that are undesirable or detrimental to humans and the ecosystem: climate change, smog, toxins in the drinking supply, nuclear weapons, a floating barge of man-made trash the size of Texas, etc.


Note that illth is man-made; it's the downside of converting metaphysical knowledge into wealth. I currently consider active ignorance, stupidity, racism and like prejudices, and the deliberate misuse of language for ideological purposes to be the metaphysical aspects of illth. See Robert Anton Wilson, The Illuminati Papers,

According to Karl Marx (and he thought and wrote that in 1844!) money, wage-labour, credit and banking are all forms of human alienation. They transform man from a real individual into an abstract caricature of his/her true self. The system of exchange is social intercourse not between men, but between men as things of value, that is, an alienated form of social intercourse. And that is just one form/level of alienation according to Marx. Unfortunately there is more.....

Thanks for the warning Michael! From "economics" to "freakonomics' !!!

In my view, in addition to Adam Smith, I think there are a few more Scottish minds worth diving into such as James Mill (apparently founder of classical economics together with David Ricardo) and his son John Stuart Mill - all very influential philosophers on Marx.

Ruskin had a huge impact on Proust.